Alexander likes to write quickly. Else, the very first inspirational feeling can quickly go away and making the work on an unfinished idea uninteresting. Watercolor allows you not to miss a moment of creative inspiration, and fix its maximum peak on a paper… If in the process of creating some kind of work, an interest in a completely different subject awakens, he tries to do the work as quickly as a possible so as not to lose interest, feeling… 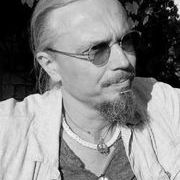 Since 1971, he lives and works in Sevastopol, where in his youth he came with his parents.

At the age of twenty Votsmush graduated from the Crimean Art School, later he studied at VGIK on the course "Animation".

Alexander does not cease to be interested in animation and stage directing, this type of creativity has become a hobby.

In 1998 he participated in the auction "Sothbey`s" - "Art Link" (Tel Aviv), all the exhibited works were sold.

It is impossible to list the exact number of solo exhibitions held in Russia, Ukraine and abroad.

It is also impossible to list the number of master classes that the painter conducted.

He is happy to share his skills and techniques with others.

His paintings are in private and public collections around the world.

In addition to drawing and films, Alexander Votsmush gladly writes a prose, scripts, as well as songs, he himself performs them. Despite the versatility of the master, in the first place is still watercolor painting.

“I am a professional painter, and everything else is a hobby at the non-professional level. For now…"